8 steps to stopping analysis paralysis in its tracks

Ever been in a job interview, exam, or public speaking situation and had your mind go blank? It’s one of the brain’s meanest tricks — but far from rare.

The reason it happens is that when we’re in a stressful situation, the mind switches its focus from the current activity, towards escape. You’ve probably heard of the phrase ‘fight or flight.’ Well, this is what happens when stress takes over.

As the authors of a study in Science put it, stress “sharpens our senses, creates a state of fearful arousal, and strengthens our memories of stressful experiences but impairs our capacity for slow deliberation.” In other words, it prepares you to act, not think.

Great when you’re in physical danger, not so useful when you’ve got a presentation to give.

What is analysis paralysis, and how does it hold you back?

Stress doesn’t just kick in when we have an important presentation or exam. We feel fear, stress, and anxiety in all kinds of situations — from making a big purchase, to deciding what to have for dinner. Analysis paralysis is when we overthink a situation to the extent that stress kicks in, and we can no longer make a sound, rational decision. It’s that very same fight or flight response that makes our minds go blank.

There have been plenty of studies on analysis paralysis, and unfortunately, the results show it’s worse than a moment of forgetfulness. The good news is, learning about it can help you rationalize and eventually overcome these negative emotions when they do strike. First, we’ll run through all the different ways overthinking holds you back:

High-pressure situations lead to lower performance. At its worst, this can lead to a complete memory blank, but milder stress can have a negative impact too.

Studies have shown that even low-levels of anxiety create distracting thoughts that flood the part of the brain used for problem-solving and learning with cortisol — a stress hormone. These parts of the brain don’t work properly under these conditions. Unfortunately, it’s a vicious cycle: the more we overthink, the more anxious we feel, which only worsens the problem.

The brain can only focus on so much, and when it’s full of anxiety-induced distractions, things like creative thought go by the wayside. It’s a similar situation to the one described above: once your brain is full, there’s little cognitive energy left for anything else.

We’re at our most creative when we’re completely relaxed. It’s why writers, songwriters, entrepreneurs, and the like keep a notepad by their bed: their best ideas come to them when they’ve allowed their brain to switch off.

Too much choice leads to mental exhaustion and indecision. This is called the paradox of choice. 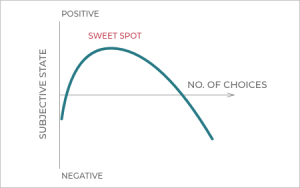 When we’re given a limited number of things to choose from, we’ll give each one careful consideration. We then feel more satisfied with our choice because we’ve given it real thought. Conversely, give a person too many options, and they’ll be more likely to second-guess themselves and feel less satisfied overall.

We make decisions all day long, and only have so much energy to apply to make those decisions. The more we have to make throughout the day, the less energy we’ll have later on, the more likely we are to be indecisive. Mark Zuckerberg and Steve Jobs understood this, which is why they chose the same outfit to wear every day: it’s one less thing to think about.

How to stop overthinking and overcome analysis paralysis

The first step to beating this is recognizing your own thought patterns. Your next step is learning to tame those out-of-control thoughts. Here are some science-backed methods to try out.

1. Do the hardest thing first

American author Mark Twain famously said that if the first thing you do in the morning is to eat a live frog, you can go through the rest of the day knowing the worst is behind you. Or in other words, do your toughest task first, and the rest of your to-do list will fly by.

As we mentioned earlier, you only have so much mental energy to apply to decision-making, and as the day wears on, your ability to make good, long-term choices decrease.

Tackle those tough decisions first thing, and you’ll be more likely to deal with them effectively. If you do find yourself getting tangled up in a spiral of analysis paralysis later on in the day, put it off until tomorrow morning and start again.

Habits — things we do instinctively, like washing our face and making that first cup of coffee in the morning — require very little thought. This lowers the cognitive load required to perform each task.

If you repeat tasks over several days or months, they’ll soon become habits. Start small. Try organizing your outfit and lunch for work the night before; create a to-do list at the end of each day, rather than at the start of the next one. As you build on these, you can add more significant, demanding tasks to your daily ritual, like exercising, going to bed earlier, and spending less time on your phone. The more good habits you have, the more energy you’ll have for other things.

3. Apply a filter to your life

We are constantly bombarded with information — whether that’s phone notifications, adverts, or a colleague tapping you on the shoulder. And then there’s our own input on top of this: we check and re-check emails, scroll newsfeeds and keep multiple tabs open on our screens. But too much information is over-stimulating and can lead to the kind of mental exhaustion that leads to analysis paralysis.

The trick here is to find your focus and remove anything that doesn’t contribute to completing your task. Turn off your emails, close unnecessary tabs, and move to a quiet place to work. Better still, before you begin, take a few moments to plan your approach. Keep a specific goal in mind, and do everything you can to stay on track.

4. Take the plunge before you feel ready

Now, there’s a lot to be said for preparation. But in some situations, you can prepare too much. There’s always going to be more you can do to research, collect, and analyze, and if you’re nervous about starting, then it’s tempting to turn preparation into a form of procrastination.

While it may feel like you’re doing something productive, you’re actually wasting time that would be better spent making that first move. Instead, take that first step before you feel ready. The rest will fall into place.

Often we’re afraid to make the first move because we’re worried about making the wrong decision. We inflate this ‘wrong’ decision to monumental proportions until we lose sight of all the possible outcomes and focus on the bad.

In reality, a poor decision often isn’t catastrophic, just as a good choice doesn’t guarantee unhindered success. Remember this next time you can’t make a choice, and you’ll feel much calmer and able to act.

6. Give yourself a deadline

Beating indecision by setting your own fake deadline is a good option, but easier said than done. To truly trick yourself into completing a task by a self-imposed time, you need to tell other people about it.

Tell your boss, coworkers, social media friends, and mum — tell everyone. That way, someone else is holding you accountable. Yes, it adds a little extra stress, but it will make you much much more likely to get things done.

Analysis paralysis is worst when you’ve invested a lot in a project. So one way to minimize the pressure is to take an iterative approach.

Start new projects with a minimum viable product — aka, a pared-back, simplified version of your product or service. Release it to a small group of people, gather their feedback, apply it to the next round, and do the whole thing again. Eventually, you’ll not only have overcome your analysis paralysis — you’ll have something that’s much more refined and suited to your target audience (even if that audience is just you).

How many times have you asked a friend what dish they’re choosing from the menu before making your own decision? Running an idea past someone else does wonders. It gives us a fresh perspective and makes us feel happier with our choice because we have someone we respect validate our ideas.

Next time you’re grappling with a decision, or you can’t make sense of something, run it past a friend or colleague. Even something as casual as a quick chat on messenger (or your team’s chat app) can do wonders for relieving analysis paralysis stress. Remember: a problem shared is a problem halved – and the same goes for making decisions.